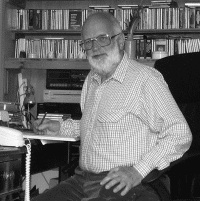 Keep up to date with David’s latest work on the News page of his website.

A full list of works is available at the bottom of this page. 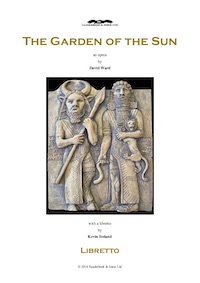 The Garden of the Sun

David Ward has provisionally finished his opera The Garden of the Sun to a libretto by NZ poet and novellist Kevin Ireland derived from the ancient Sumerian Gilgamesh epic.

The Garden of the Sun tells the story of the legendary ancient Sumerian king Gilgamesh and his furious rejection but final acceptance of the inevitability of his mortality. It starts in gloom, rage and despair, but ends in transcendence, albeit with a slight twist.

Although it has some of the characteristics of an oratorio, in particular several sections of flashbacks and indirect narrative, the piece is intended to be staged as an opera, but not necessarily in a theatre. It might lend itself to a ‘concert staging’ in a church or other suitable non-theatre venue, with simple action and movement (including the four minute dance of the snake), plus lighting and projections. In such a performance the down-stage area should be as close as practical to the audience in front of the orchestra.

The quality, stamina and stage presence of the baritone who takes on the role of Gilgamesh will be crucial to the success or failure of any performance of the piece. The stage presence of the mezzo who sings Ishtar is also crucial, although her role is fragmented and she only sings for a total of about eight minutes in the two hour piece. She has the final silent gesture. 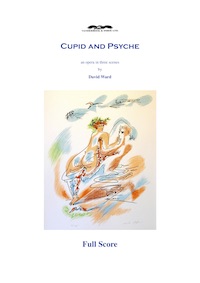 In August 2012 David Ward finished writing a new opera, this time based on the Cupid and Psyche myth, with a libretto written for him in 1985 by Kevin Ireland. Cupid and Psyche is a large chamber opera lasting 90 minutes for 6 singers and 23 instrumentalists (plus dancers ad lib.).

Click here to view or download the full score, or here for the libretto (including a synopsis and some general information).

These fragments of text from Scene 1 hint at the wide ranging variety of the libretto and music, including the darkly sardonic, the dreamily sensual and the tongue-in-cheek cynical. The four lines beginning ‘Love is a liar’ are repeated at the very end of the opera by the Olympian gods, representing those in authority piqued at the thwarting of their plans, and perhaps wrily amused at the thought that Psyche believes Cupid – one of their own, after all – will be a good husband.

Love is a liar
with a bloated smile,
a heart of briars
and an eye of bile …
* * *
… where mysteries become new pleasures
and pleasure is the only mystery,
where the sea of my love
swirls across the land –
and air and earth and water
become the warm shadows
of creation.
* * *
It’s so lamentably unfair
that she should have
so much to spare
yet be worth so little
in herself.
Putting on all these
magnificent airs
before her own sisters.
It’s so lamentably unfair.

Dreaming of Distant Love, a miniature paraphrase of Cupid and Psyche, was recorded in 2014 by Victoria Soames Samek (alto sax), Steve Bingham (violin), Chris Brannick (percussion [vibraphone, temple blocks and glockenspiel]) and Adrian Sutcliffe (electric piano [in a Fender-Rhodes simulation]) playing under the collective name FourSight. The miniature starts with the identical sax solo to Cupid and Psyche for about half a minute and then goes on to use material associated with the lovers, which in the opera is at its most developed and expansive for the duet which begins on page 297 of the full score.

You can listen to the recording here (also available on SoundCloud). 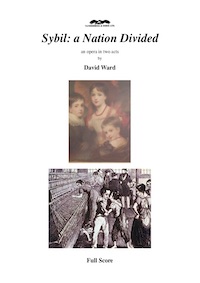 Sybil or  The Two Nations

An opera in two acts loosely based on aspects of the novel of the same name by Benjamin Disraeli, words and music by David Ward. The events depicted in the novel begin in 1837.

My piece is loosely based on aspects (no more) of the convoluted novel, but ends up going its own way… The personal stories are set against conflict and misunderstanding between the very rich and the very poor in early Victorian England. This is a metaphor for all such conflicts between the haves and the have-nots, the powerful and the weak, today as well as in the past. The story that is told of a developing love across this divide has as much relevance now as ever in the past. Disraeli has Sybil’s family turn out to be disinherited aristocrats, but for the 21st century that can be left to Mills & Boon. In my opera, Sybil remains working-class in her family origins, albeit successful rather than impoverished working-class.

I have felt unable, or at least unwilling, to provide an unequivocal ‘they lived happily ever after’ ending for the lovers, given my own downwardly mobile family background (why do politicians speak of mobility as necessarily upwards?), my sardonic sense of humour and my mildly cynical view of life. David Ward. 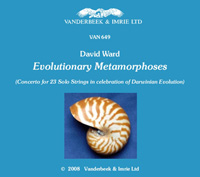 Evolutionary Metamorphoses was commissioned by the Institute of Evolutionary Studies to celebrate the Theory of Evolution and to commemorate the 200th anniversary of the birth in 1809 of Charles Darwin.

In Memoriam Simon was commissioned by Heather Barrington-Ward and is dedicated to the memory of her son Simon Jocelyn Barrington-Ward, 14th November 1957 – 25th July 1985.

First performance by the Morley Quartet (members of the Scottish Opera Orchestra) at Higham Hall, Bassenthwaite, Cumbria on 7th June 1992.