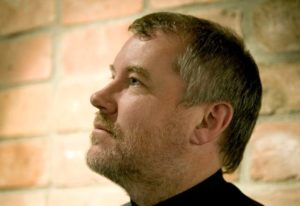 IVAN MOODY was born in London in 1964. He has studied music and theology at the Universities of London (winning the Royal Holloway Prize in 1984 for his Three Poems of Anna Akhmatova), Joensuu and York, his composition teachers being Brian Dennis, Sir John Tavener and William Brooks. He lives at present in Estoril, Portugal, with his wife, the singer Susana Diniz Moody, and their three children, Sebastian, Sofia and Barbara.

Eastern liturgical chant has had a profound influence on his music, as has the spirituality of the Orthodox Church, to which he belongs. His music has been performed and broadcast all over Europe, both East and West, as well as in Japan, the USA and South America. Following the enormous success of Canticum Canticorum I, written for the Hilliard Ensemble and performed by them all over the world, in 1990 he won the Arts for the Earth Festival Prize for Prayer for the Forests, which was subsequently premiered by the renowned Tapiola Choir in Finland.

One of his most important works to date is the oratorio Passion and Resurrection (1992), based on Orthodox liturgical texts, which was premiered in June 1993 by Red Byrd and the Estonian Philharmonic Chamber Choir under Tõnu Kaljuste at the Tampere Festival and recorded by Finnish Radio. It was subsequently repeated and broadcast to great acclaim in the Netherlands, the USA and Great Britain, and has been recorded on CD by Hyperion. The work was toured in the USA (Portland, Seattle, Irvine and Los Angeles) in October 2002 by Cappella Romana, under the composer’s direction, to rapturous applause. In April 2003 Passion and Resurrection was given its Canadian premiere by Canzona under the distinguished conductor Henry Engbrecht.

Click on the links below to view or download sample pages (pdf format) of a selection of choral music by Ivan Moody currently available.