Robert Steadman was born in Chiswick, London on April 1st 1965. He was brought up in Basingstoke, attending the Richard Aldworth School, before studying on the Pre-Professional Music Course at Cricklade College, Andover. In 1984, he gained an Associate of the Royal College of Music (A.R.C.M.) in tuba performance.

He read music at Keble College, Oxford, graduating in 1986. During his time at Oxford, Robert was the musical director of many shows and, notably, became President of the Oxford Revue Company working with Armando Ianucci and John Sparkes.

In 1995, Robert moved to the East Midlands and, following his marriage to Tracy Fudge in 2000, he moved to Matlock, Derbyshire. They have one son and two daughters.

While much of Steadman’s output has been written for amateurs and young musicians, he has also written several pieces of music for the percussionist Evelyn Glennie, for the Royal Philharmonic Orchestra, for London Brass Virtuosi, for the saxophonist Sarah Field and for the East of England Orchestra (now Sinfonia ViVA). He has written two symphonies and two operas, but is probably best known for his choral music. He has also written a great deal of chamber music, including several pieces for the Holywell Ensemble. One of his anthems was used at the memorial service for the Dunblane Massacre. He even branched out into radio jingles and penned a song for the BBC Radio One DJ, Chris Evans.

Amongst a number of commissions by a variety of performers to mark the Millennium, Robert was commissioned to compose two pieces which were performed in the Millennium Dome: Nottingham Songbook – a set of songs about the City of Nottingham, its famous people and places; and Sturdy as the Oak – a piece of music for orchestra.

Steadman has also arranged folk songs for orchestra, including She Moves Through the Fair and Simple Gifts.

Music for the theatre

Robert also wrote a mini-opera for children, The Travelling Circus, which was commissioned by the West Oxfordshire Arts Association; it lasts just twelve minutes.

As well as the music for a number of plays and dance productions, including Animal Farm, Blood Wedding and A Christmas Carol, Robert has written two musicals with writers Paul and Sharon Sansom:

Robert has written a wide range of chamber music and instrumental solos including: By the Railway Sidings: a sonata for piano (written for Amanda Hurton); Bubble’s Gonna Burst Soon for brass quintet (written for the Apollo Brass Quintet); Still Life with Quartet for clarinet, violin, ‘cello & piano (commissioned by the City of London Freemen’s School); Ten Little Indians: an A-Z of the brass ensemble for 10-piece  brass ensemble (commissioned by London Brass Virtuosi); The Rains are Coming for saxophone quartet (written for The Fairer Sax); Your Jumper’s Very Woolly for piano trio (premiered by the Holywell Ensemble at the British Music Information Centre).

You can listen to samples of some of Robert’s music on his website here. 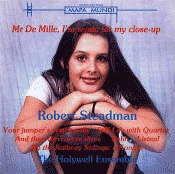 Listen to samples from the CD (used with permission) below: